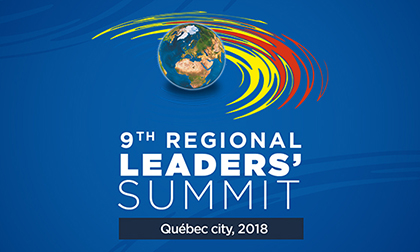 Québec hosted the ninth edition of the Summit in Québec City from May 16 to 18, 2018. This year’s theme was "Energy Transition: Toward a Low-Carbon Economy.

Summit in a nutshell

The Regional Leaders Summit composed of seven regional governments on five continents and stems from the desire to create a network of choice. The meeting, which is held every two years, encourages sharing and cooperation in several key areas.

In 2015, member regions represented over 180 million people from diverse linguistic and cultural backgrounds, with a total GDP of nearly 2,827 billion Canadian dollars.

The heads of government represent the following regions:

The driving spirit of the Summit is firmly focused on cooperation and action aimed at fostering common initiatives, particularly regarding sustainable development. These initiatives contribute to information sharing and the drafting of action plans leading to the adoption of government policies that will reconcile:

The Summit also provide a forum for bilateral talks between heads of government to:

The outcome of the discussions and the cooperation projects are then recorded in a joint declaration.